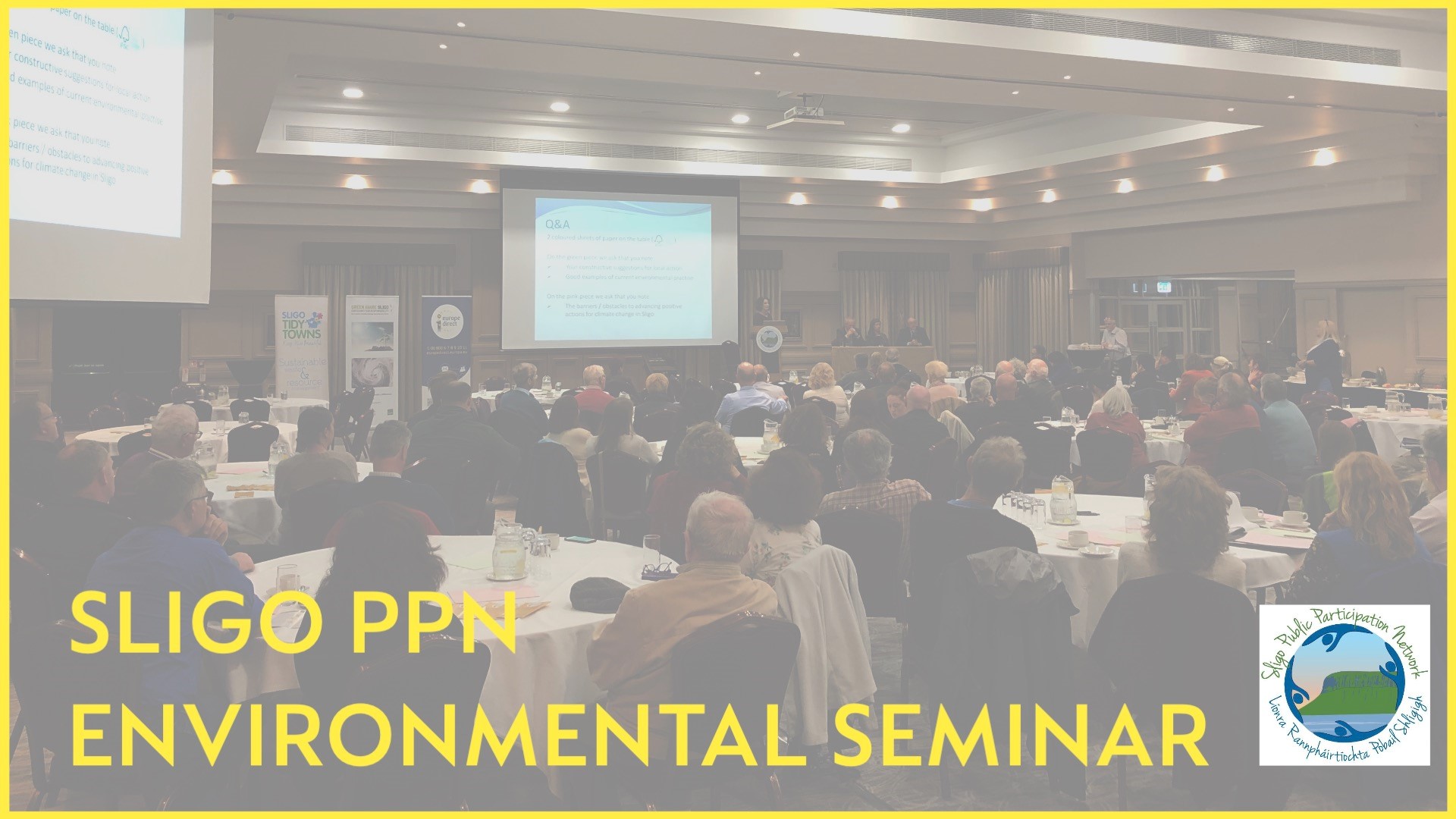 A very interesting and engaging evening of discussion on environmental issues which was coordinated by Sligo Public Participation Network (PPN) took place on Thursday evening last at the Radisson Blu Hotel in Sligo.

MC for the evening, and the first speaker, Sharon Eastwood said that in a recent survey, 95% of respondents said that they were concerned about climate change. She went on to say that while many issues stand in the way of making a real difference to reducing our negative impact on the environment, there is a great public appetite to engage with the many challenges ahead.

Cathaoirleach of Sligo County Council Councillor Tom McSharry said that it will require the support of all sectors of the community to address the challenges that lie ahead. He added that while people may think that their individual choices will have little impact on environmental change, it is through the power of entire communities that positive change can be effected. He also commended Sligo PPN for their foresight in organizing this evening’s event.
Guest speaker Professor John Sweeney of Maynooth University said that his own generation have done huge damage to the environment and that the environmental leaders are now the young people that marched recently in the climate strikes.
He pointed out that we live in very different and changed times. He said that the temperature last year was the 4th warmest on record, and that since the other 3 were in very recent years, this pattern is a major cause for concern. Changes in the atmosphere where increases in carbon dioxide have been measured show that all of the stations around the world where CO2 is measured have all gone up, in particular in the northern hemisphere.
He also pointed out that we in this country create far more CO2 than most other developed countries, on average 12.8 tonnes of CO2 per person per annum. As a result, overall, Ireland’s emissions are 50% higher than the average in the EU. We also emit more greenhouse gases than the poorest 400 million people worldwide, and these are exactly the people who will suffer most from climate change.

Professor Sweeney said that it’s important that there is a climate change dimension to all of the activities that take place in the work of the four strategic policy committees (SPCs) here in Sligo. He predicts that in the next 20 years the west of Ireland will be subject to wetter Winters and that the east of the country will suffer from drier Summers, and that temperatures will rise by half a degree in that time.

In a nationwide report compiled by Professor Sweeney a number of years ago on environmental concerns relating to individual counties, he found that Sligo has a vulnerability in relation to flooding, water supply and landslides in particular.
He concluded by asking whether Irish society is really ready to tackle climate change. We have to come to terms with agriculture being a major pollutant, he said, as well as the major problems caused by the amount of cars on the roads and general inaction by the Government up until now. But he finished on a positive, saying that our individual choices will have an impact, that we need to address the urgency of this problem for the sakes of our children and our grandchildren.
Chief Executive of Sligo County Council, Ciarán Hayes, who also has an added role as national lead on climate change for the City and County Management Association, said in a stark presentation that Sligo will lose tracts of coastline in the coming years and that this is a reality that we have to face. He added that new Climate Action Regional Offices will result in counties being clustered to ensure that counties facing similar environmental challenges like flooding or coastal erosion will have better planning and use of resources.
He also sounded a note of optimism, saying that as a nation we have matured in areas such as equality, the smoking bans, the plastic bag levy, and he also feels that society is ready to deal with the very hard decisions that lie ahead in relation to climate change.

He addressed the issue of how to create clean energy, and said that we should aim to create up to 70% of our energy through renewable sources and to then become a net exporter of power. He mentioned that the construction of wind farms in an area should mean that the community should be rewarded, perhaps by adding floodlights to the local football pitch or retrofitting the local community hall to reduce energy consumption. He gave that as an example as to how the local authority and local communities can work effectively together to benefit the environment and he also gave examples of how energy companies and local communities could cooperate – for example, where excess wind energy, which currently cannot be stored, could be used to power high energy amenities like municipal swimming pools. This, in turn, would reduce the need for pools to ‘top up’ their heating requirements using fossil fuels and therefore make them more energy efficient.
He also said that the deep retro fitting on houses in Cranmore as part of the regeneration project will mean that houses will be up to 50% more energy efficient, and that less solid fuels will be burnt, and that eventually the energy savings can be sold back to the national grid, with the effect of drawing down additional funding to resource new buildings and other enterprises for the community.

The final speaker of the evening was Olivia Jones of An Taisce, who launched the Green Local Area Network (GLAN) Sligo initiative which aims to help businesses and communities to network and up-skill in relation to their environmental practices. She added that on Thursday 10th October next a community and business workshop will take place at the Riverside Hotel in Sligo, which will hopefully be the first of many environmental networking events organized in conjunction with local businesses and community groups.

In the question and answer session at the end of the evening, Professor Sweeney made a couple of interesting points. Firstly, he said that if someone was to invest money in an environmental project, the first place they should spend that money is on energy saving, how to make your business or home more energy efficient.
He also said in response to a question from the floor that he would highly recommend that the Council would make available some land banks for public use to enable small food producers to grow vegetables.
A most insightful evening, which was very well attended considering the inclement weather outside, a sobering reminder as to the increasing frequency of weather events, all connected to the complex nature of climate change.