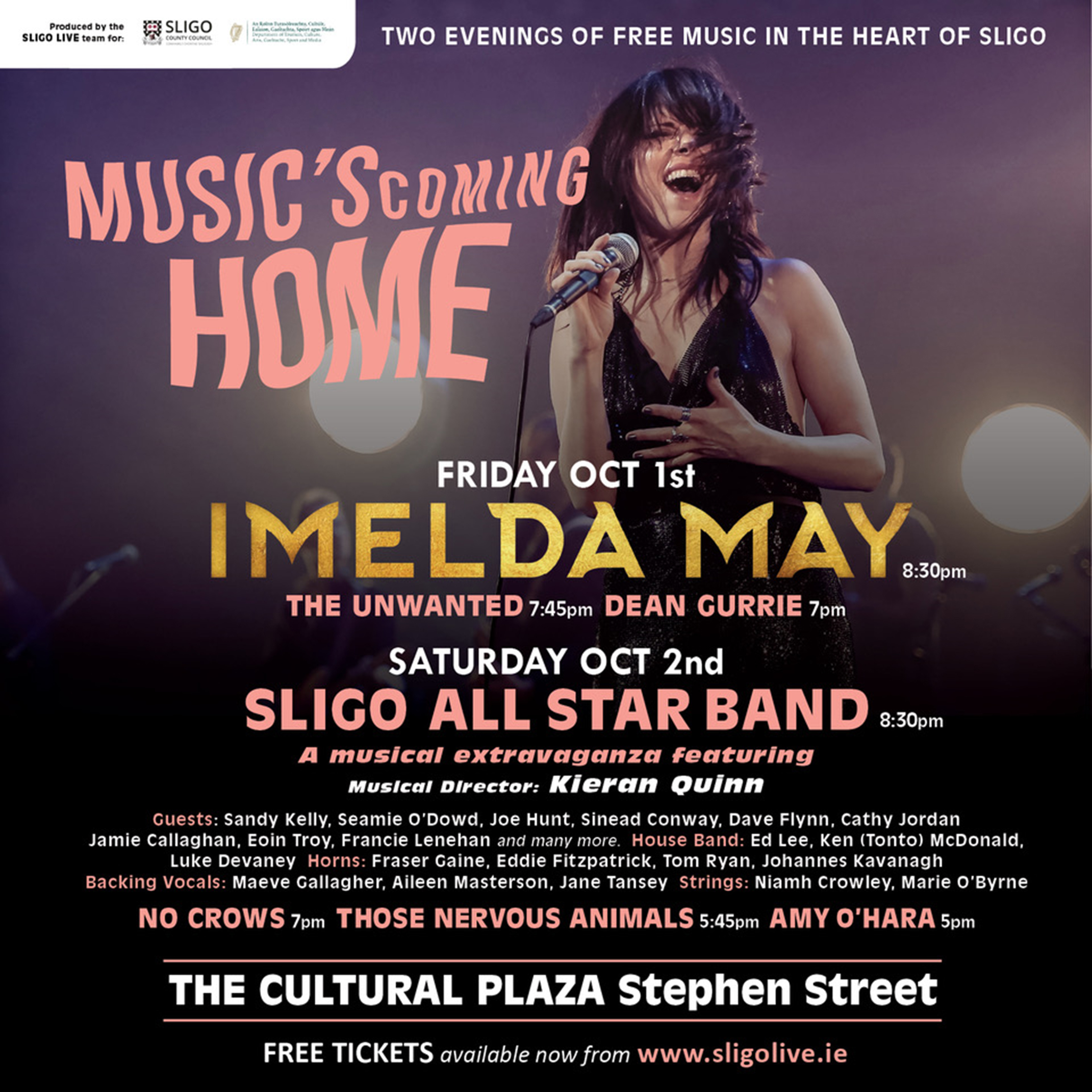 ‘Music’s Coming Home’ is a weekend of free music with 2 great concerts in the Stephen Street Car Park on Friday October 1st and Saturday 2nd featuring Imelda May and a host of brilliant Sligo musicians.

The concerts will be free of charge and are produced by the Sligo Live team, supported by Sligo County Council and made possible by the Department of Tourism, Culture, Arts, Gaeltacht, Sport and Media’s Local Live Performance Programming Scheme.

Tickets will go live for registration to the public from 10 am on Tuesday 21st September, from www.sligolive.ie

The gigs will be run strictly in accordance with the government’s guidelines and NPHET advice. Capacity will be 75% and all attendees must show proof they were vaccinated through an EU vaccination passport or other valid proof or that have recovered from Covid or have had a negative PCR test result within the past 48 hours.

Friday evening’s concert is headlined by the wonderful Imelda May with her band. Ably supporting her will be Unwanted, the Sligo trio featuring Seamie O’Dowd, Cathy Jordan and Rick Epping. Another Sligo favourite, Dean Gurrie will open Friday’s proceedings at 7pm with a set from his recent album.

In keeping with the spirit of the event’s title, Saturday’s concert will be an all-local evening with a host of musicians from MusicCitySligo.  Saturday’s headliners are an All Star Ensemble led by Kieran Quinn as musical director, featuring many of the professional musicians who have graced his shows over the past number of years.  The collective, with over 20 musicians will be called Sligo All Star Ensemble for the night.

Next on the bill is the incomparable No Crows, followed by the resurgent Those Nervous Animals who have emerged from a long hiatus to again enthral audiences around the country with their catchy melodies.  Amy O’Hara will open the show at 5pm with the first live set from her new album released during lockdown.

Producer, Willie Kelly, who has previously worked with her says

“Imelda May loves Sligo audiences; she has starred in 3 Sligo Live festivals, 2008, 2012 and 2016 to full houses and brought the house down every time.  She released her new album ’11 past the hour’ last April, which charted a #6 in the UK charts and #1 in Ireland, which makes her the only Irish female solo artist this century to have 4 number one albums and ties her with Beyonce and Madonna in second place for female artists with the most Number 1 albums in the Irish Charts this century (behind Ariana Grande).  We are really looking forward to hosting her“

Dynamic folk orchestra, No Crows have been performing their eclectic mix of folk/Trad fusion with gypsy jazz and classical influences, for 16 years.  The band are Ed Lee on Bass, Ray Coen on vocals and guitar, Anna Houston on cello and mandolin, Filipe Carbonell on guitar and the duelling fiddles of Oleg Ponomarev and Waterboy, Steve Wickham leading the way.  No Crows heady mix of original tunes and songs has been a hugely popular attraction in venues from Ireland to Switzerland.

“There is a cohesion and sense of unity that ties it together and signifies a band still in fine fettle” - Lauren Murphy, Irish Times

“They still sound relevant, perhaps even more so than when their creators were young” – Will Russell, Hot Press Magazine

While both the concerts are free of charge, tickets will be required together with proof of vaccination, recovery or a valid test result.

Capacity is limited and admission will only be available with a valid ticket or ticket code.