The N4 National Primary Route is part of the East/West road corridor linking Ireland’s largest transportation node (Dublin) with the largest transportation node in the North-West (Sligo).  It measures c. 34.8km in County Sligo of which c. 11.6km between Sligo Town and Collooney is Type 1 Dual Carriageway with c. 8.8km south of Castlebaldwin having already been realigned to Standard Single Carriageway standard (Part of the N4 Curlews Bypass).

This Road Development Project comprises of the following:

In order to provide access/egress from the local road network/dwellings/farm accesses along the western side of the online upgrade section, a single carriageway parallel access road (Western Parallel Link) is proposed to the west of the existing N4 between Cloonamahan Td. and Doorly Td.  This proposed access road shall be linked to the eastern parallel road via a proposed underbridge at Doorly Td.

An overbridge shall be provided at Toberbride Td. from the proposed Eastern Parallel Link Road to facilitate access/egress for the existing local road network.

The N4 Collooney to Castlebaldwin Road Project has a dedicated website https://www.n4realignment.ie/ where you will find the following: 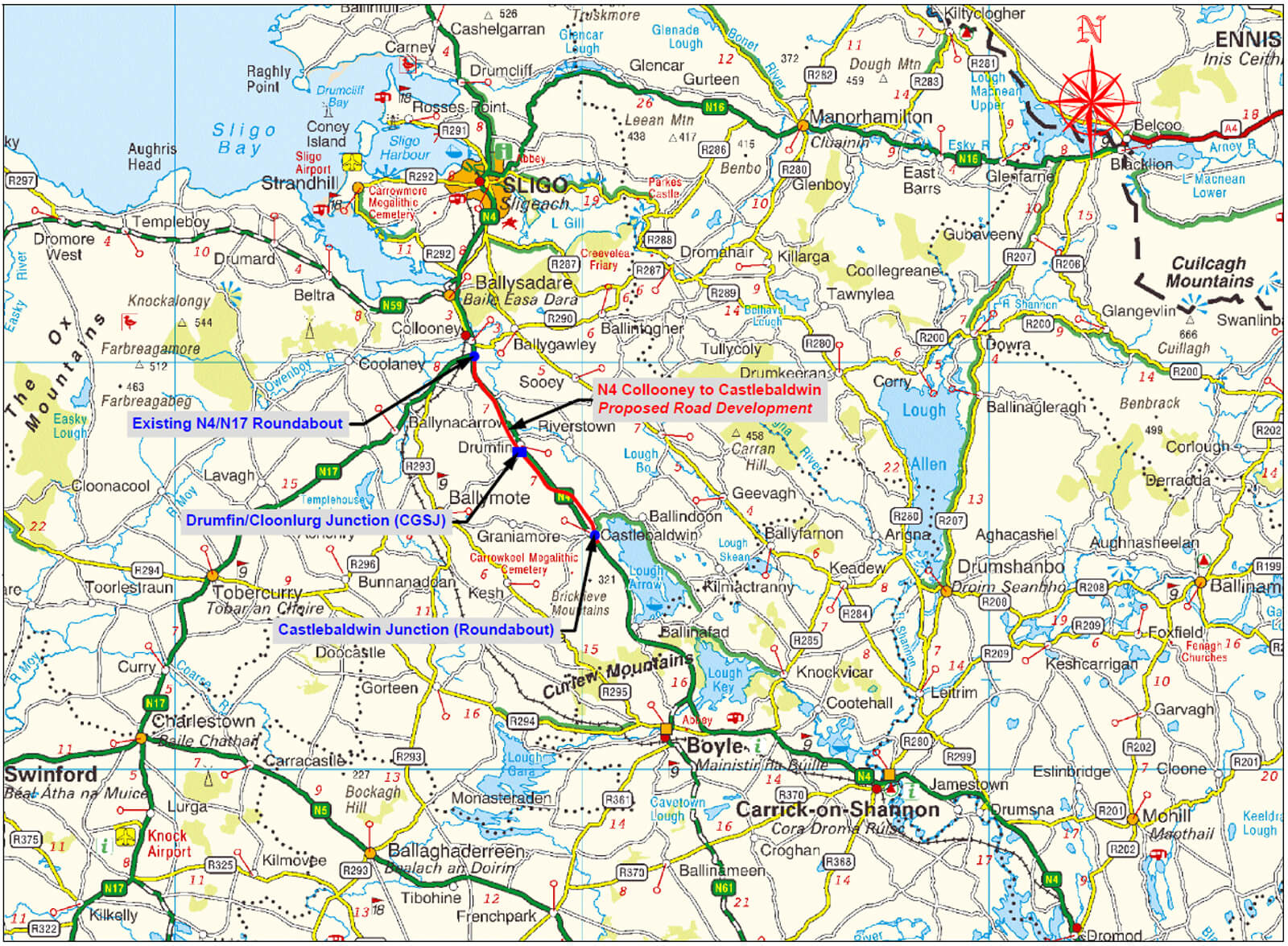 The planning and design of the N4 Collooney to Castlebaldwin Road Project was developed in accordance with the National Roads Authority (Now Transport Infrastructure Ireland) Project Management Guidelines.  This document outlines the framework for the phased approach to the development, management and delivery of national road schemes.  The 2010 version which applied largely to this Project set outs the progression of a National Road Realignment Project into seven phases as outlined below: 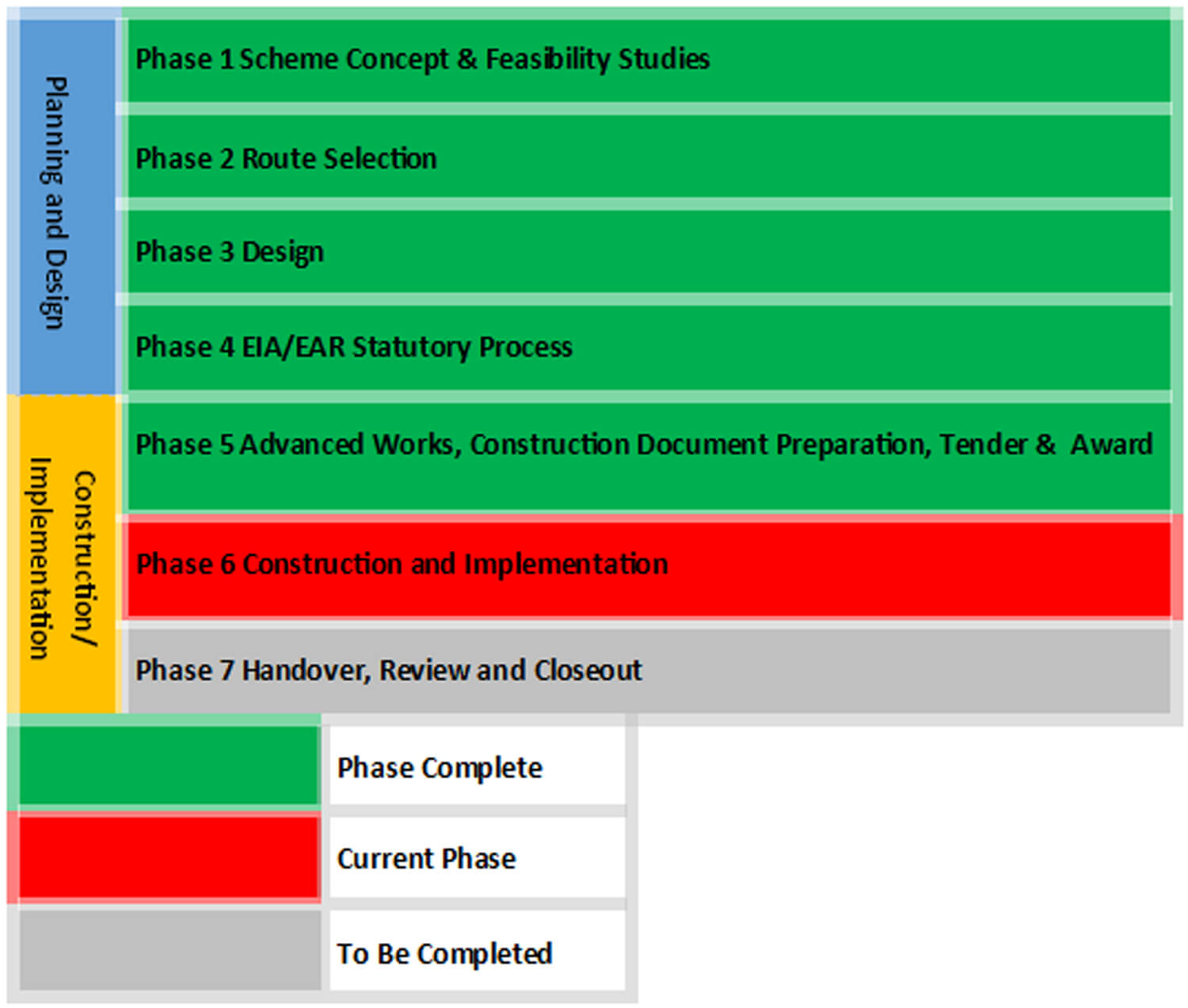 This Project was approved by An Bord Pleanála in July 2014.  The Compulsory Purchase Order was confirmed by Sligo County Council (SCC) in August 2014.

This also enabled land purchase to commence.  The Scheme involves the acquisition of 181.5 hectares of land (135 landowners) which included 14 dwelling houses.  Agreement has been reached with over 95% of landowners to date in relation to compensation and accommodation works packages.  Sligo County Council wishes to take this opportunity to acknowledge the goodwill and co-operation of the affected landowners throughout the progression of this Project.

A tender process was undertaken to appoint Consultants to progress remaining Phases 5 works in addition to provision of technical support to Sligo County Council for Phase 6 and 7 of the NRA Project Management Guidelines.  Halcrow Barry (Now Barry Transportation Ltd.) were awarded this Contract in Q2, 2017.

A Contract Notice for the main construction works was published on e-Tenders and the associated Official Journal of the European Union (OJEU) website commencing the pre-qualification process for a construction contractor in Q4, 2017.  Seven Candidates submitted Suitability Assessment Questionnaires by the closing date in Q1, 2018.  Following assessment, five Candidates were shortlisted and invited to tender in Q2, 2018.  Tenders were received from four of the five Candidates before the deadline for tender receipt in Q3, 2018.  The fifth Candidate withdrew from the tender process in May 2018.  A detailed tender assessment was undertaken to determine the winning Candidate.

The N4 Collooney to Castlebaldwin Road Project is currently at Phase 6 – Construction and Implementation.  Roadbridge Ltd. has mobilised and commenced with the establishment of site compounds at Toberbride Business Park and Drumfin South off the local road L-1502-32.  Extensive archaeological and ecological surveys were initially carried out prior to the main construction works and are continuing at various locations throughout the site.  Site clearance and demolition works are also ongoing.  Haulage roads, temporary diversions and Bulk earthworks are being progressed.

Objectives of the Road Development:

The provision of the realignment provides the following key benefits:

In early December 2013, correspondence was received from the NRA (now TII) conveying approval to publish the Compulsory Purchase Order (CPO), Environmental Impact Statement (EIS) and Natura Impact Statement (NIS) and to submit the N4 Collooney to Castlebaldwin Proposed Road Development to An Bord Pleanála for planning approval.  The publication of Statutory Notices in Local and National press on the 19th and 21st December 2013 commenced this process.  The CPO, EIS and NIS were placed on Public display and submissions or observations were requested to be made by interested parties to An Bord Pleanála.

The Board subsequently held an Oral Hearing from the 28th to the 30th of April in the Castledargan Hotel, Ballygawley.  This provided a forum for the cross examination of the aforementioned witnesses by those who had made bona-fide submissions and the Inspector delegated by the Board to conduct the hearing.

Following this the Board, having considered the objections made and the report of the Inspector who conducted the Oral Hearing approved (on the 22nd of July, 2014) the Proposed Road Development under section 51 of the Roads Act, 1993 (as amended).  The Board also confirmed the CPO for the Proposed Road Development.  Notice of Confirmation of the CPO was published in the Sligo Weekender on the 28th August 2014 with the CPO becoming operative 3 weeks later.  The eight week period during which an appeal to the High Court could take place ended on the 24th October, 2014.

Sligo County Council has appointed Roadbridge Ltd. to undertake the construction of the Project.

Should you have any queries or observations/comments in relation to the construction works and associated traffic management, please contact Roadbridge Ltd. on freephone number 071 91 67299.

View Briefs of Evidence for the Proposed Road Development