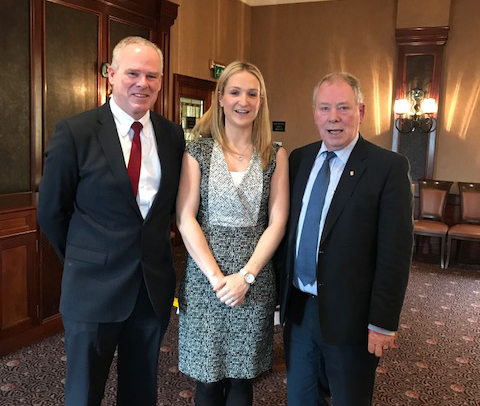 The eleven local authorities that comprise the Ireland/Northern Ireland Border Corridor met with Helen McEntee, Minister of State for European Affairs in Newry on Tuesday 6th March 2018 to discuss the implications of Brexit on the Border Corridor.

A large delegation comprising Chairpersons, Mayors and Chief Executives from all the local authorities who comprise the Border Corridor attended the meeting, the size of the delegation reflects just how important this issue is, not just for local authorities, but for all the people who live and work along the Ireland/Northern Ireland border corridor.

“Without a Government in the North of Ireland and negotiations taking place between Brussels and London directly, local authorities felt it necessary to champion the needs of the border region specifically and to ensure that those needs are reflected and prioritised during Brexit negotiations. Our children and grandchildren’s lives depend on decisions which will be taken over the next few years. It is our duty to get this right.  It is the contention of the Border Corridor Local Authorities that in order to do that all aspects of the Good Friday Agreement must be maintained.”

The issue of Brexit was one of the most challenging issues facing the country, with likely impacts at regional and national level. ‘This forum was very useful, as it allowed us to engage directly with colleagues from other Local Authorities in the border area – the communities in this region have very specific concerns in relation to areas such as tourism, enterprise and agriculture, and we need to have a joined-up approach in the local authority sector to dealing with these important issues.’

The first task of the Local Authority grouping was to commission a study to begin to explore what the actual impact of Brexit might be along the corridor.  This was not an easy task considering the huge uncertainty around what Brexit actually means.  The Ulster University Economic Policy Centre produced a report “BREXIT and the Border Corridor on the Island of Ireland, Risks, Opportunities and Issues to Consider”.

The Report highlights that the Irish border area will be most affected by Brexit and that an economic border would be detrimental to, not only the Border Corridor, but to Ireland as a whole. It also found that whilst economic certainty is important, political certainty is essential for the border corridor to thrive and the Peace Process cannot be jeopardised.

The aim of the meeting today is to highlight the need for investment and support for the Border Corridor and to stress two overarching strategic points which emanated from the study:

There is no doubt that the Ireland/Northern Ireland Border area will be most affected by Brexit.  After Brexit the border will become a gateway both into and out of the European Union.  It appears that the UK will exit both the single market and the Customs Union and if this is the case the EU will need to protect their market and therefore enforce controls on the Border.  No one wants to see that happening. Controls along the border will impact negatively, not just along the border but Ireland as a whole.

In order to mitigate against the negative impact on the Border Corridor the Local authorities are requesting investment in Infrastructure (road/rail/broadband/telecoms), Investment in Business support, and a commitment that future EU Funding such as INTERREG and Peace are still accessible to the Border Region post Brexit.  This investment will help ensure that the Border Region is better able to deal with the challenges of Brexit, but also to maximise any opportunities that may arise.