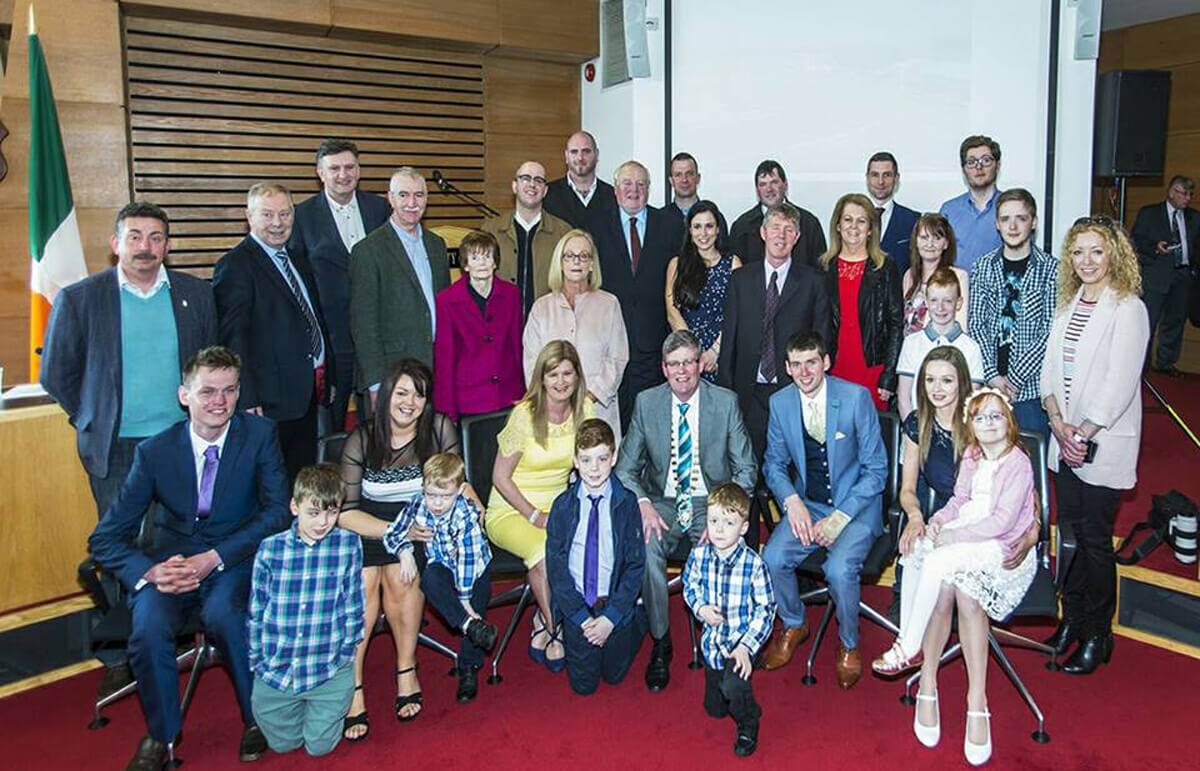 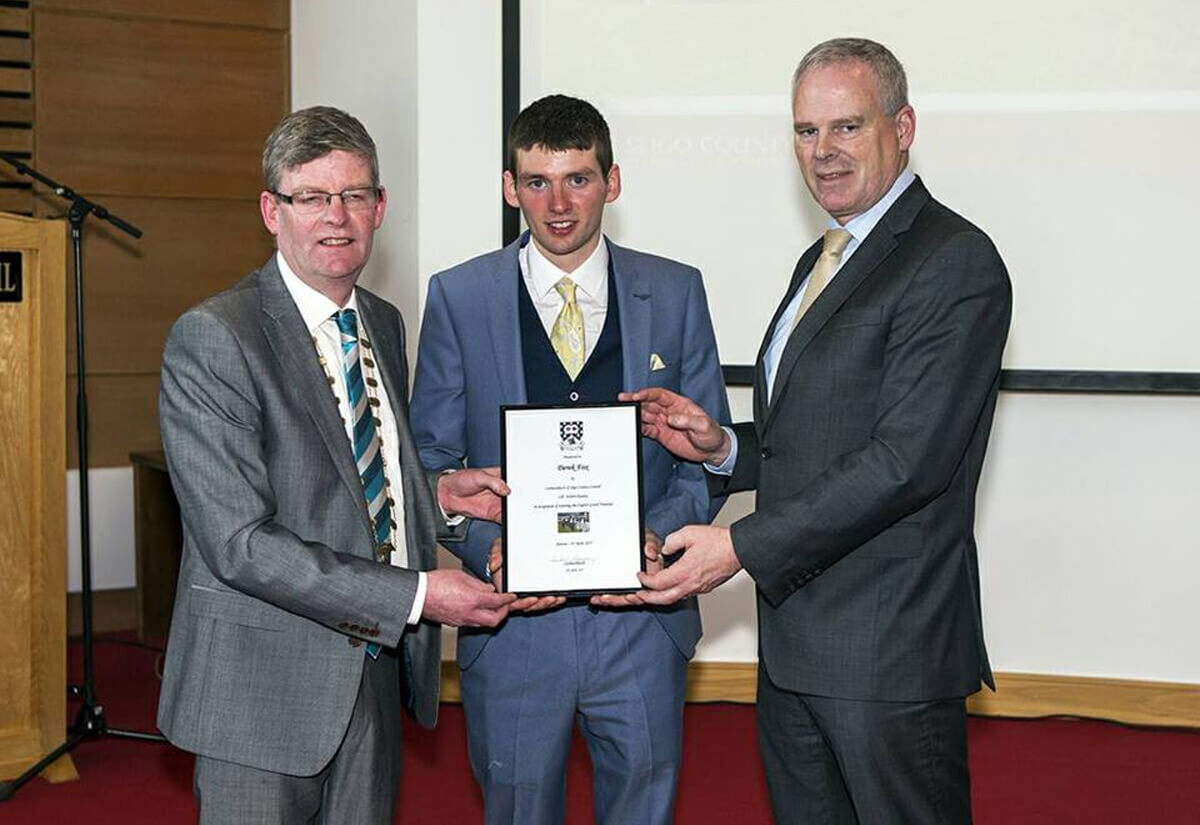 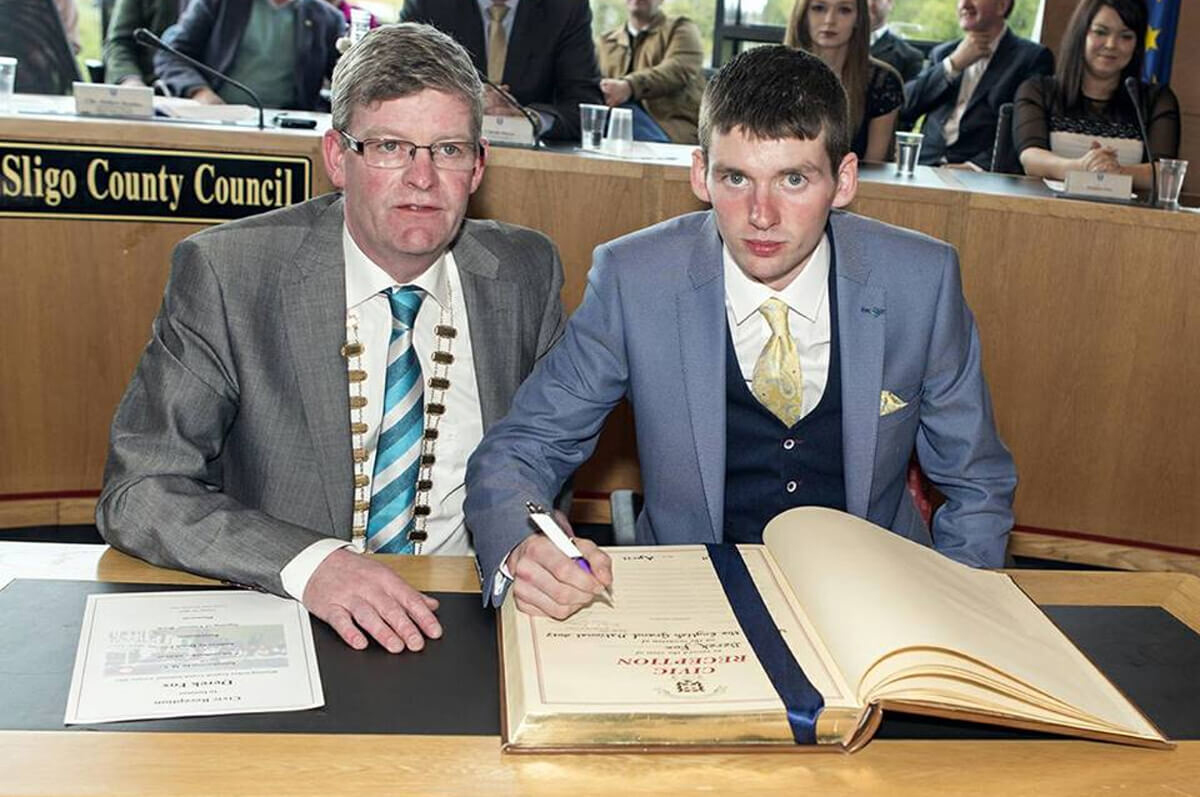 A huge crowd turned out at County Hall on Easter Sunday evening to welcome home Sligo’s latest sporting hero, Derek Fox, who just a week ago rode ‘One for Arthur’ to win the 2017 Aintree Grand National.

Derek was at Sligo County Council’s offices for a Civic Reception in his honour, and he was accompanied by his mother Jacqueline, sisters Sarah and Jessica and extended family and friends.

‘I just did the steering’ was Derek’s modest summary of the Grand National win ‘One for Arthur’ was a pleasure to ride, a brave horse who always give of his best.’ Derek also paid tribute to his uncle, Trainer Mark McNiff ‘When I was starting of in this game Mark gave me great advice which has stayed with me to this day.’

"When the dust finally settles on Derek’s amazing success just one week ago, history will record it as one of the most remarkable sporting achievements by any Sligo person."

The people in horse and racing circles were well aware of Derek’s pedigree in the lead up to the Grand National, and many quietly tipped him as one of the likely winners. But for the rest of us, it was only in the immediate aftermath of the race that word filtered through that Derek Fox was one of our own. Indeed, people at Sligo County Council felt a special affinity with the Fox family, as Derek’s sister Sarah worked here for a time, and you could not meet a more helpful, efficient and obliging person.

For Derek himself, it must still appear something like a dream, but while he was very modest in his post – race interviews, the reality is that in any sport you do not reach the very top level unless you are enormously gifted.

When you add to Derek’s natural talent his drive, determination and ambition, it should have been no surprise that he emerged as the winner of racing’s most prestigious accolade. The determination I refer to was certainly a major factor in this success, only four weeks before the race  he suffered serious injuries in a fall at Carlisle.

Much of the media commentary in the last week has highlighted Derek’s skill and prowess as an outstanding jockey, but they also referred to his enormous courage and resilience, and these qualities will live long in the memory.  For most people, this would have caused them to withdraw and focus their energies on a well planned recovery. But Derek is made of different stuff, and it would have taken more than a broken wrist and damaged collar-bone to keep him away from the Aintree track on Saturday last.

In simple terms, winning the Aintree Grand National is one of the most high profile achievements in the annual sporting calendar. To see a Sligo native earn this accolade is a source of immense pride to the whole community, not solely those involved in horse-racing. Derek is hugely respected in racing circles, and has been with Scottish Trainer Lucinda Russell’s stable since October 2013.  In her interviews Lucinda talked about Derek’s contagious enthusiasm for his sport, and that was certainly clear for all to see on Saturday.

A major success like this also services as a great inspiration for many young people who might dream of following in your foot-steps, and I don’t think they could have a finer role model. In honouring Derek, it would be remiss of me not to mention his compatriot in this glorious achievement ‘One for Arthur’. He is only the second Scottish-trained winner of the Grand National, and the second Sligo born jockey to do so, and from a local perspective, Aintree 2017 will go down in local sporting history.’

The Cathaoirleach concluded his address by saying ‘Derek, on behalf of this Council and the people of Sligo, I want to commend you on this wonderful accomplishment, you are a true sporting legend. While the celebrations may come to a close at some point, the sense of pride in our community will live on for many years to come.’

The Cathaoirleach and Chief Executive Ciarán Hayes made presentations to Derek, following which he invited his special guest to sign the Distinguished Visitors’ Book.