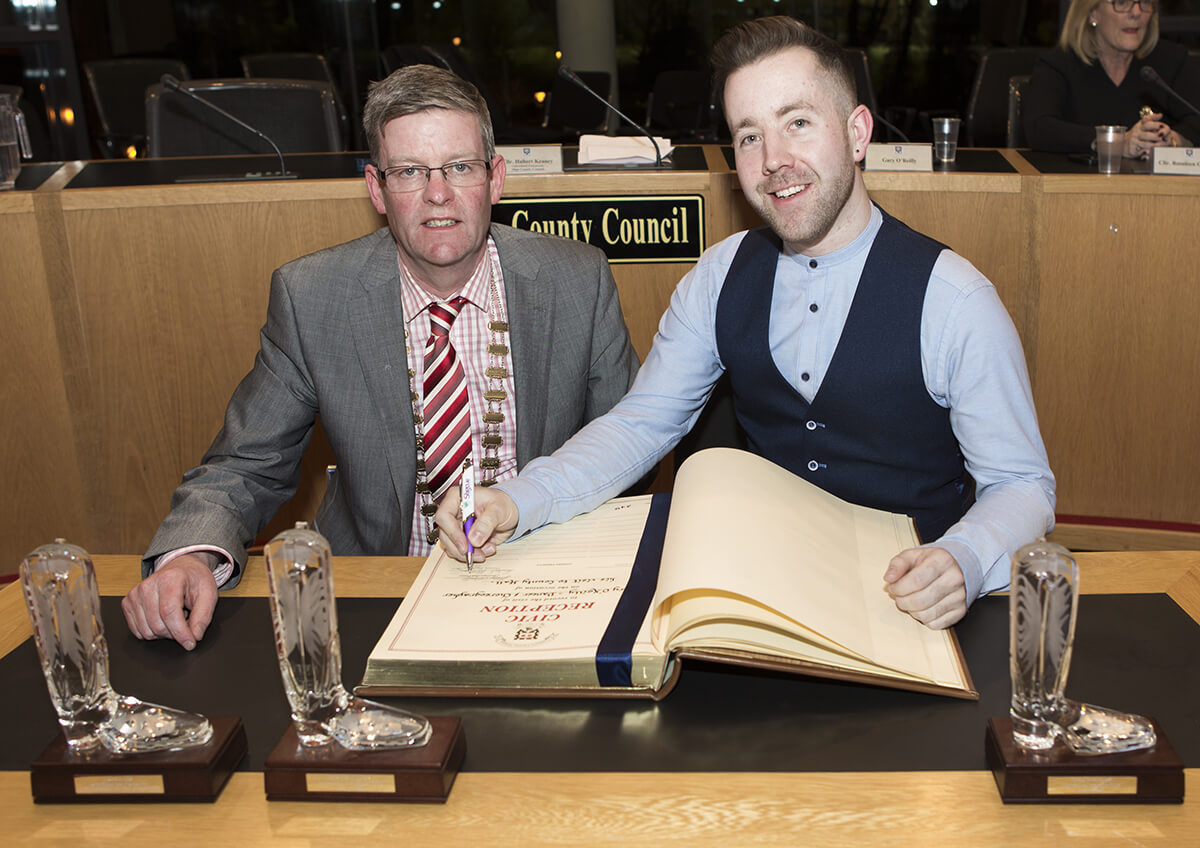 Internationally acclaimed Dancer and Choreographer Gary O’Reilly has been honoured with a reception at County Hall hosted by the Cathaoirleach of Sligo County Council Councillor Hubert Keaney.

Gary’s many achievements include seven nominations at the Line-Dance Crystal Boot Award in Blackpool in January this year, winning awards for International Choreographer of the Year, International Instructor of the Year, and he also won a special award for the dance he choreographed with Maggie Gallagher, ‘the Galway Gathering.’

In his address the Cathaoirleach said ‘The people of Sligo feel a special sense of pride when one of their own excel on the national or international stage, whether their field of endeavour is sports, arts, political, music, literature, or in this case, dance and choreography. While Gary is recognised as an outstanding leader in his field, I think we should  acknowledge that his exceptional skill and ability alone did not bring him his success – there were years of practice, competitions, travel, - but his perseverance and ambition, allied to his undoubted natural talent, made sure he stood out from the crowd.

You can track a steady and impressive progression in Gary’s career from a very early age, having first started line dancing when he was six years of age. He embraced every aspect of his new passion with great enthusiasm, revelling in the social dimension as well as being energised by the competitive edge.

Gary discovered he had a natural flair which took him to a highly creditable second place finish in the European Championships.  Three years ago, his international profile dramatically increased when he choreographed a dance to a Nathan Carter song that attracted widespread plaudits and critical acclaim, and for many Dance Instructors, this was their first introduction to Gary O’Reilly.

His reputation was further enhanced when he collaborated with renowned Line-Dance personality Maggie Gallagher on a fund- raising initiative which generated €7,500 for Irish Cancer research

The profile and publicity generated by these events prompted invitations from all over the world, England, Norway, France, Germany, America – his growing status knew no boundaries, his passion knew no limits. Over the next two years Gary will again be on his travels to export his unique talent to countries and communities all over the world, where he will instruct and inspire countless aspiring young dancers to follow in his foot-steps.’

The Cathaoirleach concluded his address by calling Gary ‘An outstanding ambassador for Sligo’.