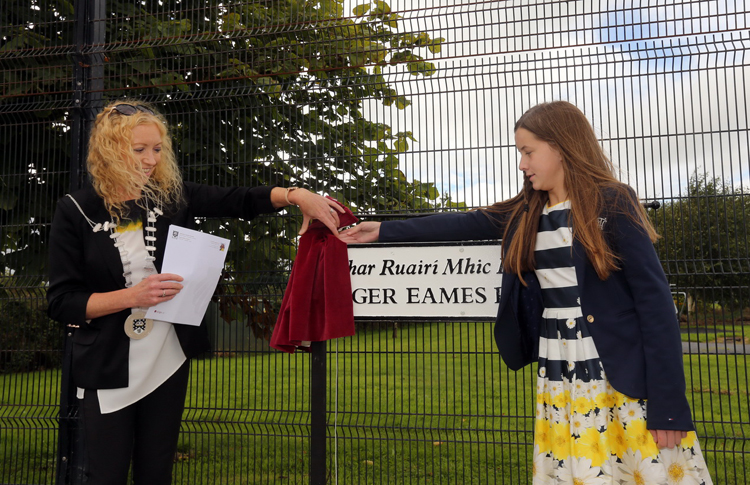 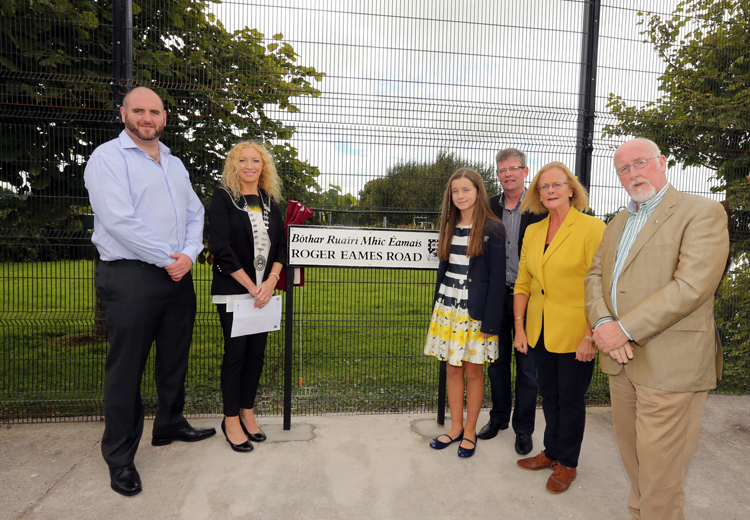 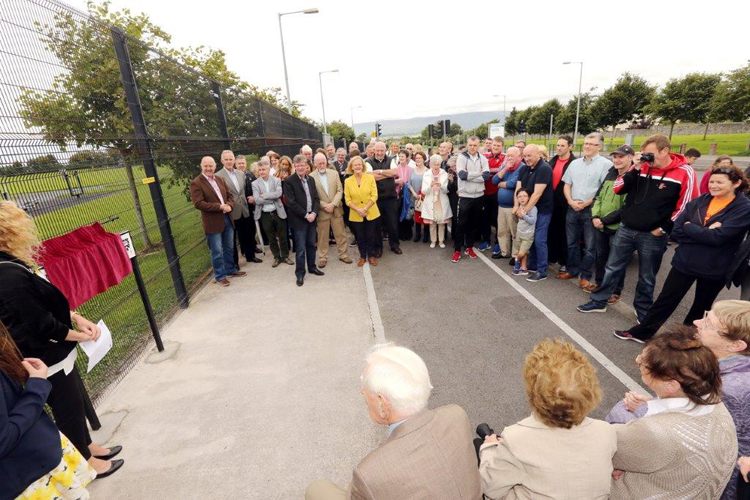 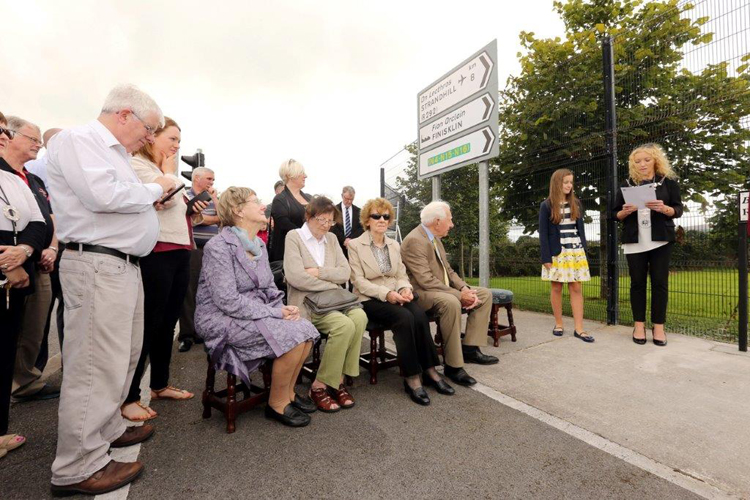 Mayor of Sligo Municipal District Councillor Marie Casserly welcomed members of the Eames family to the official naming of the ‘Roger Eames’ Road in Ballydoogan on Saturday. The opening ceremony was followed by a reception hosted by the Mayor in City Hall, which was attended by Eames family and friends, local Councillors, representatives of St Mary’s GAA Club and Sligo Community Games.

In her address the Mayor said there was no finer tribute we can pay as a local authority than to name a roadway or building after someone who has made a special contribution in their life-time ‘And by any measure Roger Eames contribution was special; He was an iconic figure in his community, a passionate and articulate advocate for two causes close to his heart – Gaelic Football and Community Games

He was a founder member of Muire Naoife Club, now St Mary’s, and was Chairman of the Sligo Minor Board.  His active involvement in Community Games saw him serve as President of Maugheraboy Community Games and also served on the County Executive.

In his role as a dedicated volunteer across a wide range of activity, Roger was an inspirational figure whose enthusiasm and spirit were the catalyst for numerous projects and initiatives.  It is also fitting that the location of the road that bears his name is at the heart of the community he served and loved, adjoining St Mary’s and Mitchell Curley Park.

Throughout his lifetime Roger was committed to the development of youth, and infused young people with the ideals and ethos of community games.  In his quiet and unassuming way, he gently encouraged them to give of their best and to realise their true potential, wise counsel that served them well in their sporting endeavours and beyond.  A special welcome to Roger’s sisters Patsy and Dymphna, this must be a proud day for them and indeed all the family, and it is a privilege to have them here with us today.

The Mayor paid a special tribute to Alison for her role in inspiring the event; ‘I also want to mention in particular Alison, whose love for her Grandfather, and her resolve to see his legacy honoured, was the starting point of a journey that culminates in today’s ceremony. Alison, you touched the hearts of our Council with your moving tribute, and you should take pride in the central role you have played in bringing today’s events to fruition.

Roger was selfless and generous, a kind neighbour, a revered friend, a respected and admired pillar of his community.  And while the Sligo community takes a collective pride in honouring him here today, we cannot claim him exclusively as our own, among his many achievements was being awarded Leitrim Personality of the Year in 1984.

It is heartening that many of Roger’s achievements were acknowledged in his life-time.  On 16th October 1983, St Mary’s Sports Complex was officially opened, and the Senior team captain Tommy Carroll said ‘Roger Eames contribution to St Mary’s has been enormous, and he deserves the thanks of the club and the hundreds of young players he has helped enjoy Gaelic football down the years.

I was honoured to co-sponsor the proposal with my colleague Councillor Sean MacManus that we name the road in honour of Roger Eames.  Now the many people who have been touched by Roger’s kindness and grace will reflect with great fondness on his memory, and will pay their  own quiet tribute when they pass along the road that will forever bear his name.’.